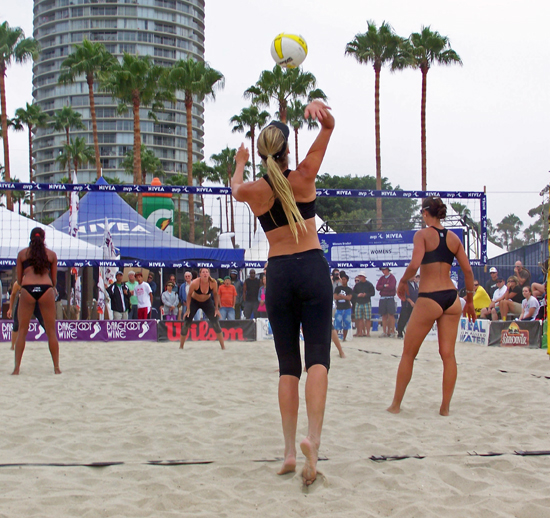 This weekend Gabby and co were back at the AVP event in Long Beach, CA playing a 4 on 4 competition thanks to Nike, Paul Mitchell, Bud Light, and Nivea/AVP. As most of Gabby’s fans know she used to play pro beach 4’s on the Bud Light Pro Beach 4 Person Tour. It folded in 2000 and has yet to make a comeback. Gabby with her love for the game still strong put together a couple events to coexist with the doubles tour (AVP).  With the sad news today that the AVP is struggling it only makes this past weekend that much sweeter. Like most businesses (and people) today they are getting hit hard because of the economy. We are all praying beach volleyball will prevail. Not only are many athletes depending on the paychecks but its all they know. It takes years and years of training and grind to become a pro athlete and not something you can easily let go of.  It would be a shame if we don’t get to see players like Misty May, Kerri Walsh, Elaine Youngs, Rachael Wachholder, Nicole Branaugh etc etc play. They are tremendous role models for girls and women around the world. 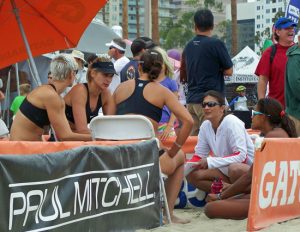 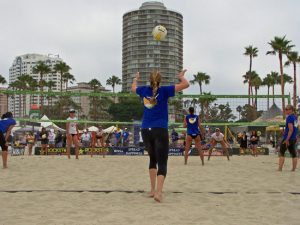 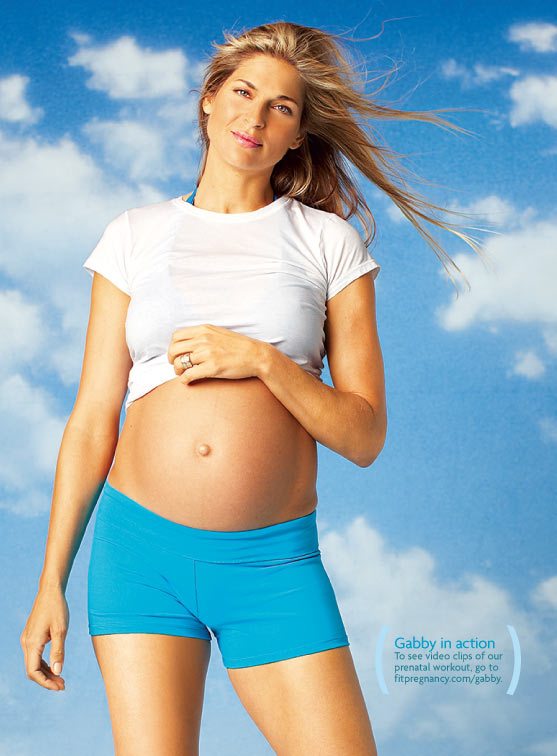 Even though my youngest daughter is a year old now I still get questions about what I ate and how I moved when I was pregnant.  It’s all like a warm blur.  Just kidding that’s my present day life I’m talking about.

First of all when it comes to pregnancy I think the number one thing you must do is to take care of yourself on all levels (physical, mental, and emotional) and embrace the hell out of the fact that you are with child. Yes, it may be uncomfortable at times, and no you’re not fitting into any of your clothes, but it’s just for a moment.  If someone makes you angry when you’re knocked up ask yourself “is it really worth it to have all those detrimental hormones pulsing through my body?”  Keep exercising, and don’t talk about your pregnancy too much (makes the time go quicker).

I love it when women first find out their pregnant and they start “eating for two” meanwhile the baby is just the side of a grape seed.  No, no, no!  Fight that urge to over eat and to eat whatever you want.  Reality is you only need about 30% more calories at the height of your pregnancy to sustain your unborn child, and I don’t think ice cream is pertinent to their brain development.

If  I didn’t want to eat animal protein or greens because the thought of trying to digest it made me want to go to sleep or gag, I improvised by doing a smoothie in the morning with protein powder and a greens mix to add to the fruity drink.  This way I was hitting all of my nutritional marks but not suffering through my meals.  Let’s say all I wanted to eat were bagels and butter. Then every other time I had the urge I would have half of one.  So it wasn’t about denial, but it also wasn’t about giving in to my every whim and then making them habits.  Oh, and by the way habits are hard to break. So when the baby comes you’ll most likely still want to eat the crazy diet you got used to!

If you are not puking and the Doc says it’s safe, do yourself a favor and do some kind of exercise for as long as you can.  This will help with your recovery once the baby has arrived, and I do believe if you continue to exercise it makes the pregnancy easier.  In the end it’s like raising your children, you still have to follow your instinct and do what works for you.

So, figure out the way to keep yourself moving and ways to eat that agree with you and your lifestyle.  There is no one right way, but it is proven exercise and eating well will help tremendously on all fronts (surprise surprise).

* Week with a lot of time and low stress:
Get it done, people. Run with it. Eat great and exercise 5 to 6 days a week. Be super disciplined during this time because it’s a great opportunity to make “deposits” that you can draw against later. Eat 4 to 5 times a day (small portions), living food (avoid processed or fast food), see if you can drink water instead of soda, and give the booze a break.

* Week with a little time but some stress:
This is the week when you are going to try and get your quick workouts in religiously (say, 4 to 5 days a week for at least 30 minutes). Because you have stress, you will probably be turning to food for comfort. So allow yourself time within each day to ease off the gas and enjoy. If you want to have that glass of wine at the end of the day or a mid-afternoon treat, then OK. This is even more reason that you have to get your workouts in. No excuses. No emotions. Get the movement in while there is time.

* Week with no time:
Now this is the tricky week. You already know you don’t have time to exercise, so now you have to commit to be in fifth gear when it comes to what goes into your mouth. Listen, you can help yourself with your food. If you can’t get to the gym or go biking because there is just no time, then assist yourself by watching what you eat and drink. Water, water, water. Consume tons of green living food and moderate those portions. You will find that you won’t lose too much ground (in the way you look) if you are disciplined in your eating. This is a great remedy for someone who has to be on the road a lot. Monitoring food also will help you avoid feeling too sluggish from lack of exercise — also a biggy on helping with mood swings. Get your power from your living food. Beware of the snacking.

* Holiday week:
During these weeks, you have some time but really want to have fun and just get into the pie and eggnog. OK. I think even during this time you can “manage” it. Let’s say you are heading to a favorite aunt’s house who makes the most kick-ass food, then save the gorging for her stop. Or if you are having a family reunion with a big dinner at some amazing restaurant, then don’t just pig out the entire gathering… save it. Make sure you still get in at least a walk after eating, and within your slacking, pick your moments. Most importantly, enjoy yourself. This way, when the festivities are done, you will be ready to get back into the swing of things. I find that when I cook, I eat less. I feel like I’m around the food so much that by the time I’m ready to serve that special meal, I’m over it. It helps with portion control.