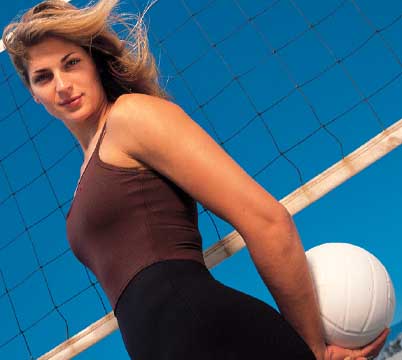 Gabrielle Reece is a striking combination of strength and beauty. But it’s not just her looks that make her stand out in the athletic world. The 6’3,” 170-pound middle-blocker’s killer instinct on the court has earned her record-holding status. Off the court, her keen business sense has gained her an ever growing media career.

The woman once named among “America’s 50 Most Beautiful People” by People magazine now has a voice to accompany the high-profile face. Reece writes a regular column, Elle Sport, for Elle magazine and appears on “MTV Sports” and Nike TV commercials. “I always knew I had this potential in me for doing more than sports,” she says of her media success. “Lots of women may be better athletes, but right now I have the bigger voice, and I want to take advantage of it.”

Reece is no doubt a qualified spokesperson for sports and fitness, considering she’s “tried everything when it comes to training.” She began weight training at 17 and has followed a serious lifting regimen the past two years. To keep the pace, she completely avoids smoking, drinking and caffeine and takes amino acids, antioxidants and liver tablets. “Eating is 50% of staying in shape,” says Reece, whose nutrition plan is to just listen to her body. The other 50% includes specialty programs like Pilates to stretch and strengthen, biofeedback for developing optimum performance, visualization and mental practices to build up focus and, most recently, a 51-minute weight lifting circuit that her avid workout partners admit they couldn’t complete themselves.

“I do strength training to no end,” says Reece, describing a daily schedule with four to seven hours of workouts and practices. “Even between seasons, I’m never really off training. However, my workouts are always for sports. I’ve never lifted a weight for cosmetic reasons. I’ve reshaped my body this past year strictly for strength reasons.”

What is Reece’s advice to women who aren’t out to set pro volleyball records? “When I write articles or give interviews, I don’t say ‘be like me,’ or ‘you just have to be in the right place at the right time,'” she says, acknowledging her genetics account for much of her success. “I tell women, evolve with who you are not with who the world says you’re supposed to be. My message isn’t just about athletics–it’s more human, just about being a woman.”

For Reece, who was discovered by high school basketball coaches early on, sports was a natural evolution. “The coaches latched right onto me,” she recalls. “It was a godsend, like when someone gives you the best thing in your life and you just don’t know it yet. Now, I thank my lucky stars for the talents I’ve been given.”

Reece, who received a full scholarship to Florida State University, says sports got her into college where she began her serious training and entered the volleyball circuit. Reece recalls college as a difficult time when she faced the conflicting career choice of pro sports versus a lucrative life in modeling. She says the daily routine of the team is what kept her going. Within a year of graduating, she accomplished both goals, earning $10,000 a day for modeling and becoming a leading pro beach volleyball player in California.

In hindsight, Reece regards sports participation as her healthiest outlet. “Sports gave me direction, it’s what I love to do,” she says. “My philosophy is there’s a place for everyone, but only one place. I did well in modeling, but it wasn’t me. I think that’s why I’m successful–not because I’m lucky, but because I know my abilities.

“Being physical in sports teaches you to feel O.K. with your body and yourself–you learn confidence,” she adds. “Some people think to be a woman, you have to act like a lady, but what’s great about the women I play volleyball with is they’re a little bit masculine–very verbal and uninhibited.”

Such traits have become valuable to Reece in her latest sideline endeavors as a fitness writer for Elle magazine. She says interviewing sports stars like Charles Barkley, Jackie Joyner Kersee, Dionne Sanders and Picaboo Street has been a challenge. “I’m the one kept waiting,” she says. “Then, I only get 30 minutes to do an interview–it’s very humbling.”

“MTV Sports” presents even bigger challenges, such as skydiving with Navy SEALs, bobsledding, hang gliding and solo drag racing at 302 miles per hour. With her marketable strength and agility, Reece also personifies the women’s fitness image as Nike’s commercial spokesperson for the women’s cross training division. She even designed its cross training shoe, the Air Trainer Set, last spring. There may be more Nike TV spots in store, but, in the meantime, you can bet the Nike pro beach volleyball team, of which Reece is team captain, will be sporting her signature shoe.

Juggling a dual lifestyle as a pro athlete and elite model turned media maven requires a lot of discipline and energy. Reece has demonstrated both in her career roles. “On the one hand, I didn’t chase after publicity–it just sort of fell onto me,” says Reece, who’s appeared on the “Today” show, “Entertainment Tonight” and “E!” and the covers of just about every national women’s magazine. “On the other hand, I feel I always have to work harder because I happen to be a gifted athlete. I owe it to myself to go as far as I can go.”

The dichotomy of her success–achieved through luck as well as hard work–is something Reece recognizes. She takes advantage of her opportunities and whole-heartedly applies herself to achieve even more. “I used modeling when I was younger, and it’s led to a six-year relationship with Elle, my sponsorship with Nike and my role on MTV,” acknowledges Reece. “I want to keep setting new precedents, so I have to be smart about my decisions.”

At 24, with most of her grown-up life ahead of her, Reece still faces plenty more decisions. “As far as my future plans, I don’t want to be a trend–being everywhere doing everything,” she says. “I want to be somewhere in a strong way and then move on to something else while I’m still at a high point, so I can always evolve.

“Whatever I do, it won’t just be the obvious choice,” she adds. “I want my success to be a result of the things I do, not vice versa.” For a woman who learned early in life to pursue only what makes her happy, nothing seems out of the question.