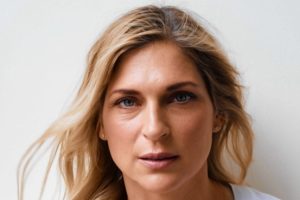 Gabrielle Reece, the former model and professional volleyball player, springs up from a squat while hurling a dumbbell over her head. She is demonstrating a move for a group that is training with her at an Upper East Side gym in New York, where she’s on tour for her new book, “My Foot Is Too Big for the Glass Slipper: A Guide to the Less Than Perfect Life.” So far, certainly, this trip has been less than perfect.

After suggesting on national television in mid-April that women should be submissive to their husbands, Ms. Reece, 43, immediately felt the backlash. Legions of social-media commentators wondered everything from how many years she had set back the women’s movement to how “being a doormat is a sign of strength.” It all started with a line in her book about how she behaves in her marriage to surfer Laird Hamilton: “To be truly feminine means being soft, receptive, and—look out, here it comes—submissive.”

On this morning, as she moves on to “mountain-climber push-ups,” Ms. Reece’s muscle-bound 6-foot-3 physique looks anything but submissive. Still, the hubbub was nearly enough to keep her hiding in her hotel. “The first day, I didn’t want to go anywhere,” she admits. “My friend told me I may as well have said I worship the devil.”

At the grueling 75-minute circuit training class, it’s clear that she’s not there to socialize. Ms. Reece casually introduces herself to the 30-some participants as any other exercise teacher would. “One thing I don’t want to be is controversial,” she says after class. “I wrote the book to start the conversation, but I didn’t know this would be the point of entry.”

Ms. Reece got her start playing professional volleyball soon after college. She began a modeling career around the same time and then went on to be a television co-host and actress. She married Mr. Hamilton in 1997, and then four years later filed for divorce. It’s this event and the couple’s subsequent recovery—they never went through with the divorce—that has become the basis of Ms. Reece’s opinions on gender roles. For her part, she doesn’t consider herself a feminist. “I’m a humanist,” she says.

The contrast between her physical strength and suggested “submissive” behavior is key to her philosophy. Ms. Reece says she is one woman at work and a different one at home. In class, she’s in control, taking no flak from the pair of Upper East Side alpha moms who complain that her class is too hectic. “You’re welcome to leave,” she says matter-of-factly, before turning away with a swish of her long ponytail. “I can be as hard or gnarly as I want, but I can switch right back,” she says later.

It was a tough lesson to learn. Ms. Reece says that her marriage got off to a rocky start because the dynamic was wrong between her and her husband. “They say that some people want to be respected and some people want to be cherished,” she says. “In my workplace, you bet I want respect, but for my partner I’m actually more interested in being cherished.” She smirks, adding, “My husband does respect me, but he’s not like, ‘Well done today with the home—bravo, Gabrielle.’ ”

The two ultimately worked things out when Ms. Reece spoke up about how she was feeling. She took time off to stay home with their children (they split their time between California and Hawaii) and adopted, as she calls it, a “service-oriented” role in the house.

After class, Ms. Reece can’t help standing out as she walks down the street. A head taller than everyone else, she draws stares from men and women alike. At a diner called Big Daddy’s, the waitress nods in recognition and gives us a prime booth among the rowdy Sunday-brunch crowd. Ms. Reece orders scrambled eggs with feta and wheat toast, and continues to defend her stance on femininity. She says that her idea of being feminine doesn’t prohibit her from speaking her mind. But, she adds, “I had to make more of an effort in projecting desire and kind of a softness that I wasn’t doing.”

In turn, Ms. Reece doesn’t want a stay-at-home husband. “If you have an alpha male going off working and doing, he’s not going to be the one going to the kids’ parties,” she says.

But Ms. Reece holds her own when it comes to other women. “With women, everything’s so heavy and gushy and serious,” she says. “How about we just say this is totally crazy and f— up, and anyway, having this conversation is a luxury we can have post-feminism.” She would rather focus on motivating people to be fit and healthy and “accountable for making [themselves] happy.”

Her hope is to eventually expand her workout class, BodyWise, nationally and then score a regular on-air segment as a fitness expert. Meanwhile, she and Mr. Hamilton have recently launched a line of nutrition and weight-loss supplements called Truition in partnership with record producer Rick Rubin. With three daughters, ages 5, 9 and 17, still in the house, it’s a way to stay with her family while keeping her career going.

And though she may not have the proverbial “all,” she has all that she wants for now. “My kids will come to me at birthday parties and say, ‘There’s cake and there’s cookies and there’s ice cream—can I have it all?’ ” Ms. Reece tells them to pick one or have half of one and half of the other. “I don’t get how women think you can be the CEO and go to every soccer game and have some gnarly sex life,” she says.

Her thoughts return to the two women complaining at her class that morning. “You can tell those women have hassles,” she says, and vows not to take it personally. “Some women just fight to fight. I fight to win.”